Time for a book review!
I read The Goldfinch by Donna Tartt, which won the Pulitzer Prize for fiction in 2014. 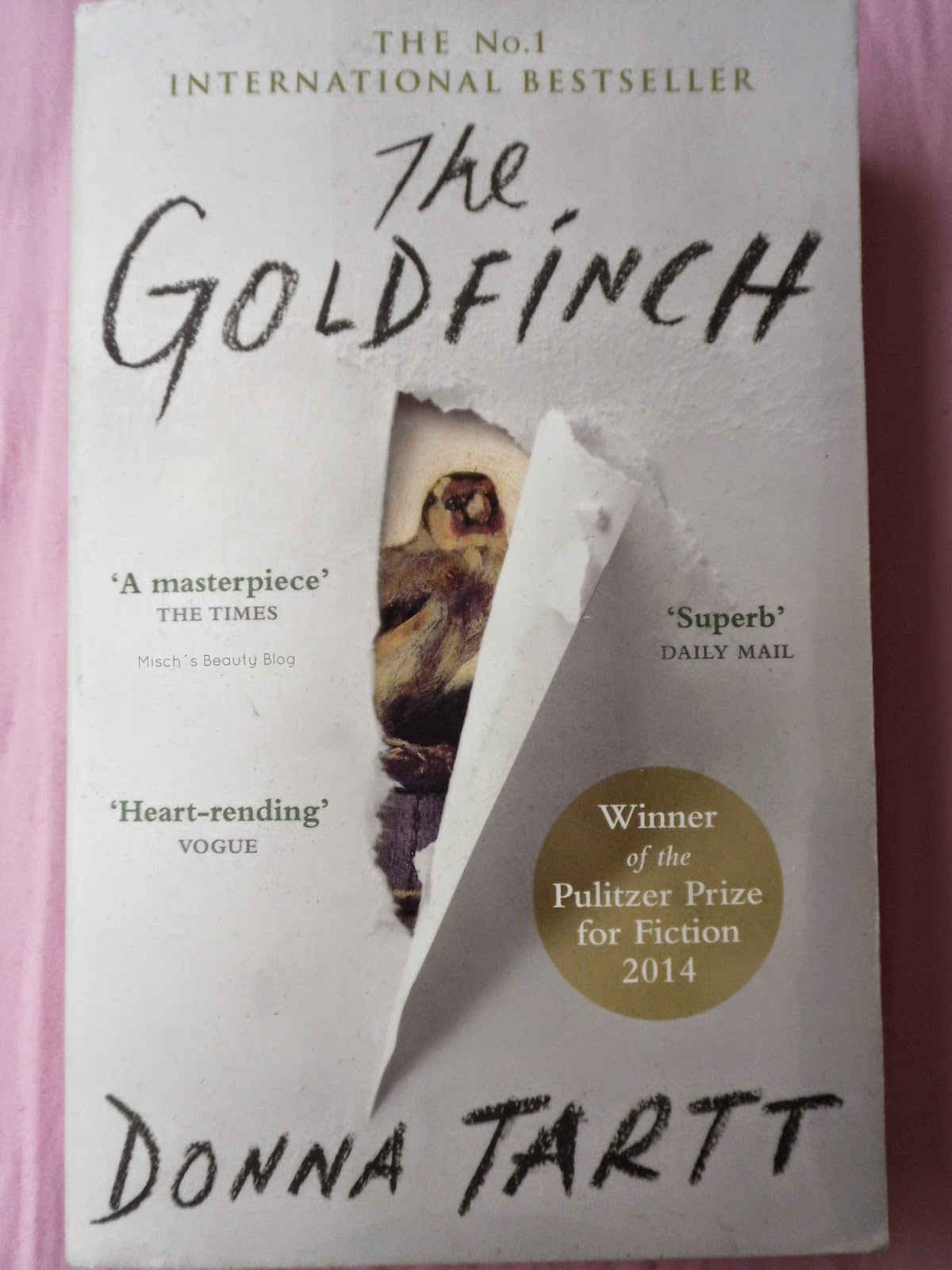 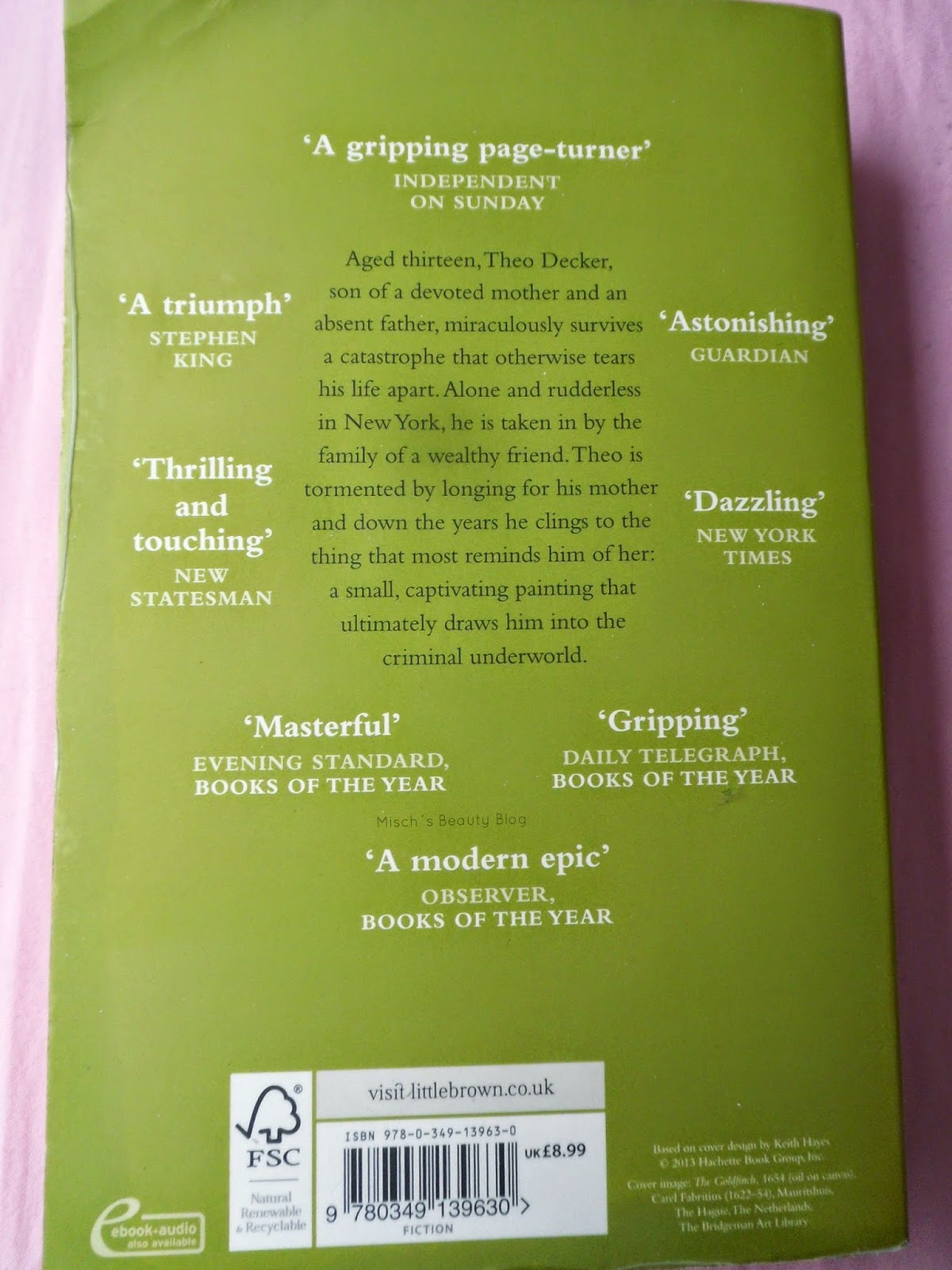 The story is about Theo Decker, who is 13 years old at the beginning of the story. He lives in New York City with his mother, and the two share a very close bond. When she is killed in an explosion in a museum they both visit, Theo survives and in his confusion takes with him a painting of a goldfinch that was torn down during the explosion. During the next time, Theo's life is determined by his sorrow and grief for the loss of his mother. As his father left his family years ago, Theo goes to live with the rich family of his best friend. Simultaneously he becomes friends with an owner of a antiques store, whose partner was also killed in the attack. But when he finally adjusts to this new life, his father comes to pick him up. He is now forced to come to Las Vegas and stay with him and his new girlfriend. These new surroundings change Theo a lot. Being under no parental control or care, he has to learn how to take care of himself. Together with his new friend Boris, he isn't exactly doing a great job, getting into drugs and theft. All the while he takes great care of his 'stolen' painting and hides it well, even though the possession does not make him feel at ease. At some point, he decides he has to go back to New York. Becoming an adult makes him face all kinds of challenges and ultimately, he gets into trouble and criminal activities due to 'his' painting.

Essentially, The Goldfinch tells a big part of Theo's life, and it is all narrated from his point of view in the first person. The grief for his mother and the mixed feelings the painting causes him are what make his story so different and special. It's never boring, even though not positive at all. Often he realizes he doesn't know what he's doing or why he is doing certain things. These moments, and different kinds of setbacks, make for lots of negative experiences.

Still, the main story, the actions and events that is, are not exactly extraordinary. The odds that things like these happen to a person are small, especially those concerning the painting. But there's still something to the story that makes it all seem very plausible, and in some cases not too exciting. I found that for example during the events in Las Vegas, it felt a little stretched.

Theo's character is mainly shaped by what happens to him so early on, and how he can or can't deal with it. That makes him a variable protagonist and his actions not predictable. But not only his character is an unprecedented individual, but all the other ones are definitely special. His companions are far from normal; not one of them is one-dimensional or simple. They all have their traits and peculiarities, which makes them likeable and interesting.

There's one thing that makes this book utterly interesting and a must read: the way everything is described. The author has a great talent for telling everything in its smallest detail, but still not making it seem overdone. Theo's way of perceiving the world is so fascinating that no matter what sentence you read, you can see and feel every detail. That's why even when the plot of the story in some parts lacks suspense, it is never bad or boring. The writing is so good that you will love reading it.

I really enjoyed this book. As I said, the writing makes for such a special and different reading experience. It is a long story, and a lot to take in, so I'd have never been able to finish it in one go. But you always want to read on and find out what happens next and how everything evolves.

Has anyone of you read this book? How did you like it?
xx, Misch
Eingestellt von Misch um 00:20

Thank you for leaving a comment, I am very happy about every single one. Please respect that I will not allow disrespectful or rude contents.

Misch
Welcome to my personal blog about beauty stuff and quite a couple of other things! Hope you enjoy!

A Treat For My Lovely Followers 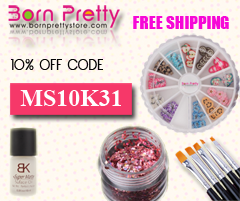 For my wonderful followers only, BornPrettyStore has offered a great discount code! When checking out, type in the code MS10K31 to receive 10% off your order. Go check the store out, they offer a huge variety of nail art supply and many more things. Happy shopping!